I think we can all breathe now. It's the end of Fashion Month. We heard so many things during that time and I must say I saw a lot of disappointment. A lot of fashion insiders were completely let down by the lack of true inspiration and innovation in designers' offerings and I can't say I blame them. Paris Fashion Week, where all of our hopes lie to see the next big, exciting things, proved to be the most underwhelming of all.

Let's take a look on this PFW's most noteworthy moments:

Two big houses, Dior and Lanvin, are still left headless since the departure of Raf Simons and Alber Elbaz respectively. Both houses' Fall 2016 collections were designed in-house, which means that the house's team took on the endeavor of creating a collection without a prominent creative director. The results however left a lot to be desired. The Christian Dior collection was significantly better, in my opinion, between the two and overall I can say it was a decent effort, just nothing particularly memorable. Chez Lanvin on the other hand, the difference between this collection and Elbaz's previous work couldn't be more stark. It was rather choppy if not a bit tacky with a heavy focus on the 80s.

On a different note, at Balenciaga Demna Gvasalia made his debut which was generally acclaimed by fashion critics although there were some inevitable comparisons made with Alexander Wang's previous tenure at the house and Gvasalia's work at ultra-hip Parisian brand Vetements. The streetstyle influences were obviously there, and whether that's a good thing or not it's up to you to decide. I personally found the collection quite charming although it is not included in my top favorites which I'm gonna speak of later.

Last but not least, I think a full recap cannot be made without a mention of Hedi Slimane's collection at Saint Laurent which left a lot of people wondering and speculating. Some deem this to have been his last collection at the house, others were completely disappointed by the 80s couture theme he went for while his hardcore fans praised him for his boldness to present something so against the grain for a fashion house like Saint Laurent. I'm personally not the biggest fan of the 80s as a period in fashion, neither have I admired Slimane's expensive prostitute look in the past. I can see why it could appeal to some but I think the marriage between Slimane's aesthetic and the YSL's legacy has had its marital problems for a while now. Maybe it's time for a divorce. 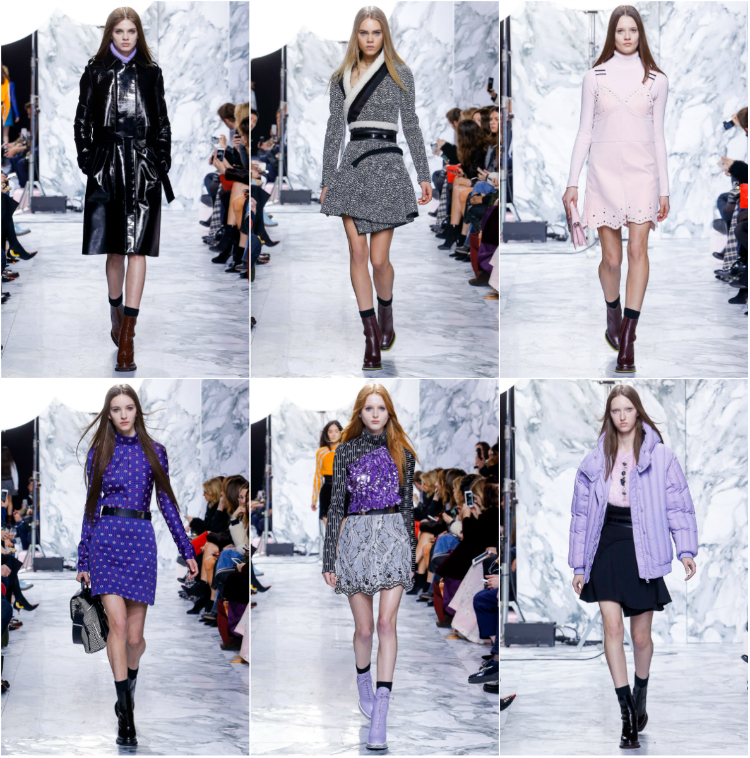 Adrien Caillaudaud and Alexis Martial are on their way up. They are redefining the Carven girl, this time as a 60s biker chick with her shearling jackets, A-line minis and patent trench. They are totally going for the French, young and cool thematic and I say they deliver on it very successfully. Among their high notes, a lingerie-inspired baby pink leather dress over a matching turtleneck, a fur-trimmed cut-out dress and a sparkly printed blouse with a lace mini skirt. A lilac puffy jacket would give the chilly winter days a new, cool touch. 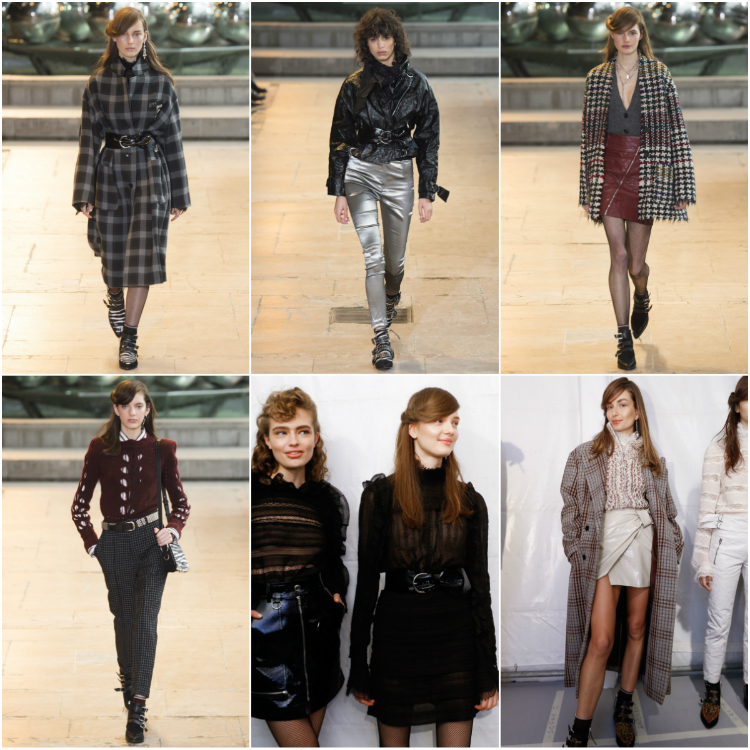 Marant never deceives her customer. She continues on delivering her boho, globe-trotting aesthetic with the same ardour as before. Yet another collection with that '70s nod (I can't complain) although I must say there was an elusive Grease feel, which was more apparent in the styling. Wrinkled leather bottoms earned a high brow while flat animal-printed buckled boots are bound to become a street staple. I particularly appreciated the cut-out knits and houndstooth outerwear which nails the ultimate boho chic. 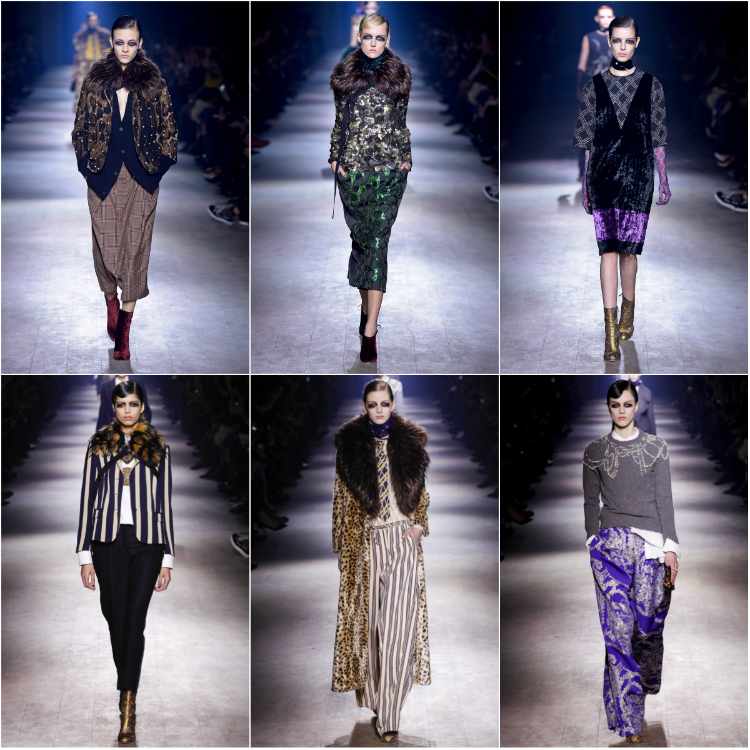 While everyone relatively kept it on the low, you can always count on Van Noten to bring that, multi-printed, androgynous, mysterious edge we love him for. While the vintage references are there, the clothes were by no means, costume-y or overly retro. It was flamboyant but in a still restrained and wearable way and it offered some much-needed excitement among the rather repetitive offerings that were seen during Paris Fashion Week. Some of my favorite looks include: an embellished knit sweater, worn over an asymmetical white shirt and paired with violet printed dressy wide-leg pants, a striped blazer with a fur collar combined with straight-leg pants and metallic boots and of course, being the girl that I am, I couldn't not lust after the glitzier evening options. 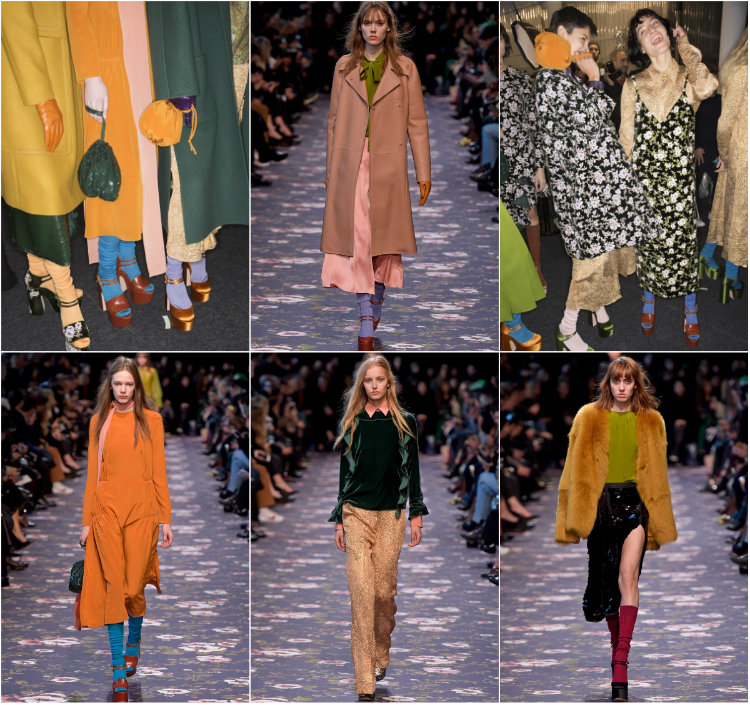 Alessandro Dell' Aqua is doing good things at Rochas. The Fall 2016 collection was feminine, romantic, vintagey but with that necessary dose of fun and quirkiness: a theme that a different Alessandro has made hugely popular lately. However Dell' Aqua is carving his own path, and he's definitely not a newcomer like Michele. He's been doing this for a long time. Peaches and nudes, knit socks, mixed and matched florals and big platforms made for a sweet, ultra-girly palette that delivers that nostalgia we all relish in. A midi skirt with a thigh-high slit and big sequins, a simple orange flowy pleated dress, a nude midi coat and a forest green velvet ruffled blouse were a few of the pieces to take home. 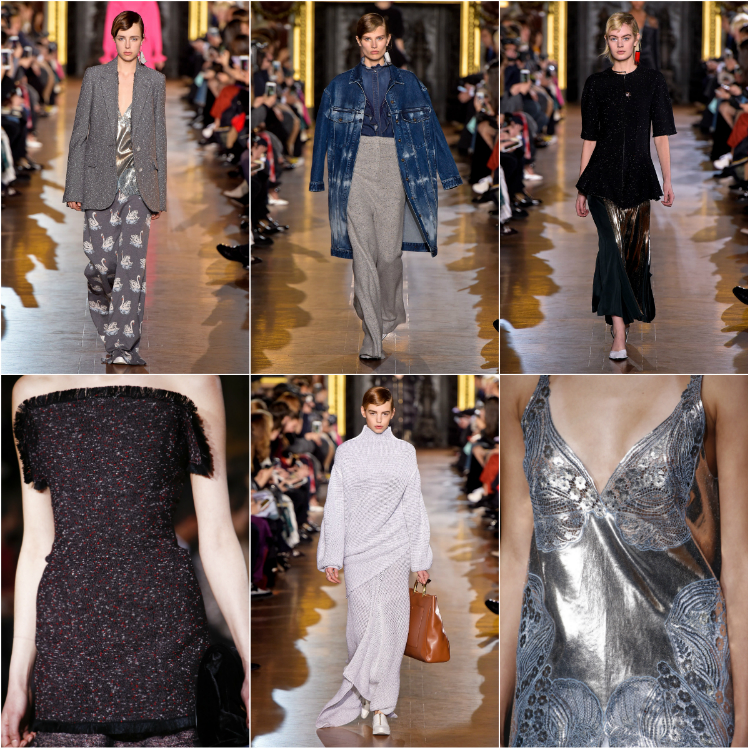 Stella's gift keeps on giving. She's one of the stongest contenders at Paris, because her unfussy, laid-back, urban aesthetic is always appreciated by women everywhere. There's a reason why huge affordable fashion chains like Zara copy her clothes and aesthetic relentlessly: it sells well. Her collection had everything you could want to fill a season's wardrobe: metallic perforated slip dresses, roomy knits, pleated midis, denim on denim, comfy swan-printed pants, lingerie tops, mannish blazers and so on. There was color, comfort, texture, variation but more than anything there was usability. Bravo, Stella. 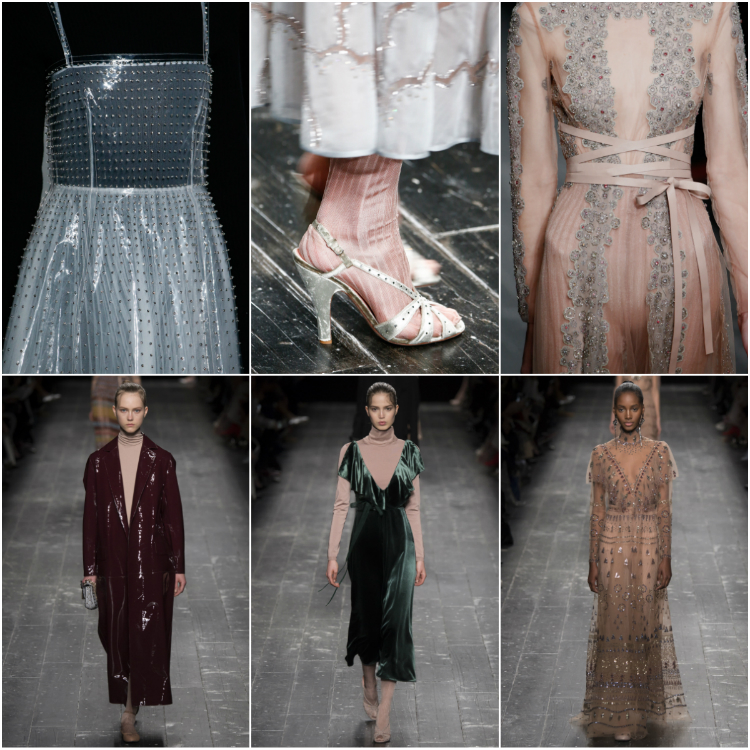 Undoubtedly my favorite collection of the entire week. Maria Grazia Chiuri and Pierpaolo Picciolini choreographed a perfect ballet show, or at least its attire. At first the show started with a series of "harder", mostly black minimal looks, continued on what you would call "high-tech" ballerina and then went full-blown romantic, ethereal, soft and feminine, the kind that makes girly girls like me sigh. A few cool touches were a long burgundy patent coat, a couple of velvet midi dresses worn over skin-like nude turtlenecks, a khaki coat paired with a silver pleated skirt and what seemed like a plastic, rhinstoned full-skirted dress layered over a black turtleneck. Extra points for the fabulous footwear. There wasn't a single bad moment within those 81 looks. 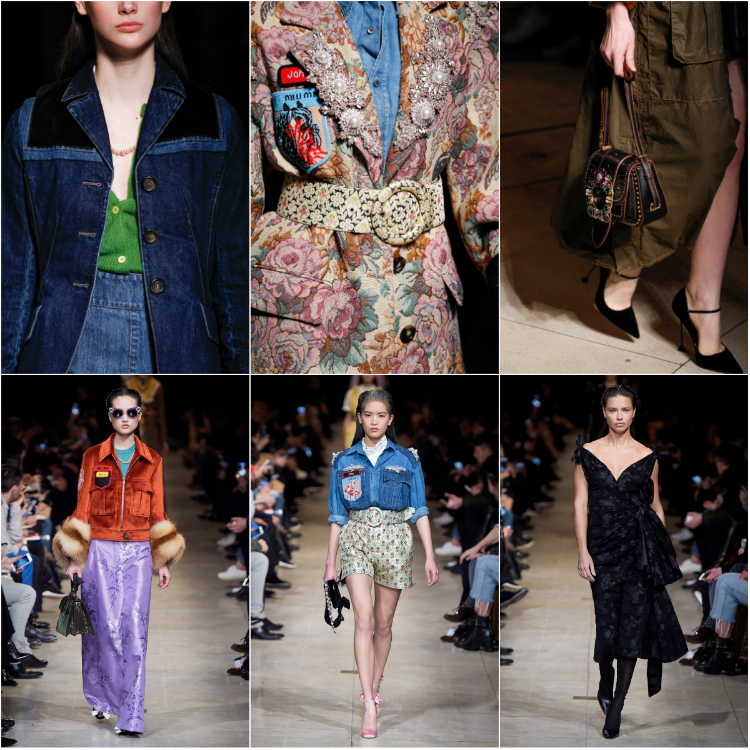 Miu Miu is always that more fun, younger sister to the grown-up Prada. I love the Miu Miu brand cause it fits my version of cool and youthful with a wink. This time, Miuccia delivered an assortment of Fall clothes and accessories heavy on the denim. Denim has had a big moment lately and designers are bound to make it a lasting one. It definitely added a more street vibe to the granny-chic, mix and matched look and the result was delightful. The point of the whole thing was to make the most of what's available, in a Scarlet O'Hara kind of way. With that rationale in mind, everything fits: denim, pearls, heavy embroideries, fur, utility jackets and bling on everything. If this was attempted by a different designer it could've been disastrous, but here it was perfect.


Which ones were your faves and why? Please sound off below!