How are ya feeling? Have you got these end-of-summer blues? Not me. I can't wait for a new and reproductive year as well as re-vamping my Fall/Winter style. Like Fitzerald says "life starts all over again when it gets crisp in the fall" and I couldn't agree more.

Each Fall we get the chance to make a new beginning, set some goals, prepare ourselves for the busy winter days. The idleness of summer has worn me out. It was a fantastic summer, I'm not complaining, but I'm not too sad to let it go. I'm so ready for hot tea, warm blankets, scarves, tights, Christmas, candles and cocooning. I'm all about that life. 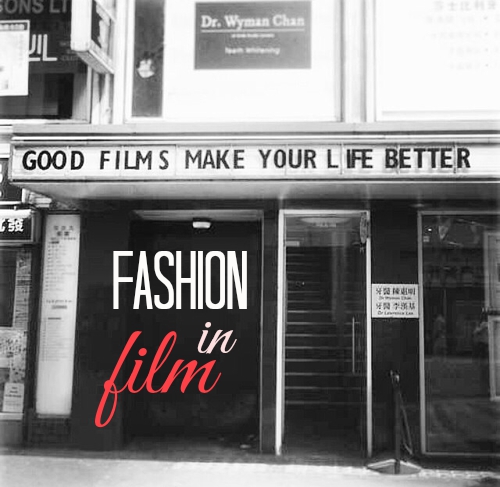 Lately I've been watching a ton of old movies. I've got that nostalgia for those times that I never knew but I've only heard about through my parents' and grandmother's stories (RIP grandma <3). I'm so intrigued to delve into the past eras and get a taste of their aesthetic, music, customs, morals, ideas. Through these films, I've been admiring Deneuve's golden locks, Audrey's doe-eyes, Hitchcock's suspense, Irene Dunne's humor, Gregory Peck's handsomeness, Cary Grant's elegance, Simon & Garfunkel's music and so much more.

I felt it was only fair to dedicate a post to these iconic actresses whose beauty and elegance will remain frozen in time. This list is by no means a complete list. It comprises of my four favorite old movie actresses and the films that turned them into style icons that magazines and designers would forever revisit. 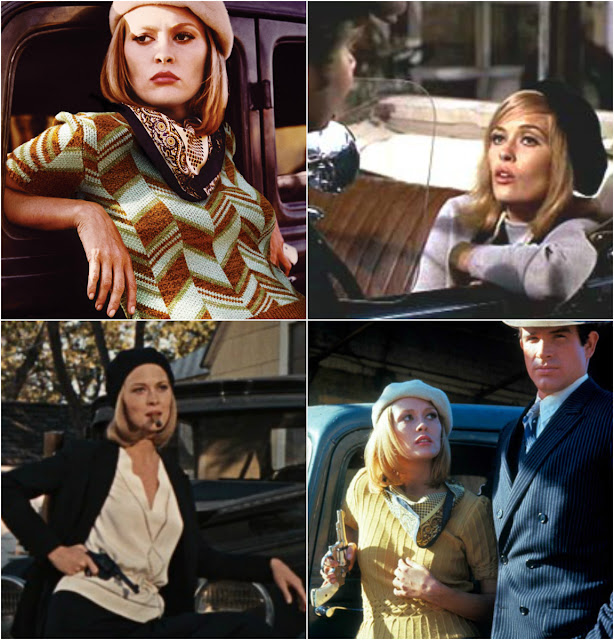 Faye Dunaway's character Bonnie Parker was one of the most iconic badass female characters in the history of film-making. Her wit, carefree spirit and effortless style turned her into a figure which designers would allude to for years and years to come. The film, which most of you are probably acquainted with, is based on a true story, set in the 1930s, in the age of the Great Depression. Dunaway looks phenomenal in her berets and scarfs and creates a signature style which is hardly topped. 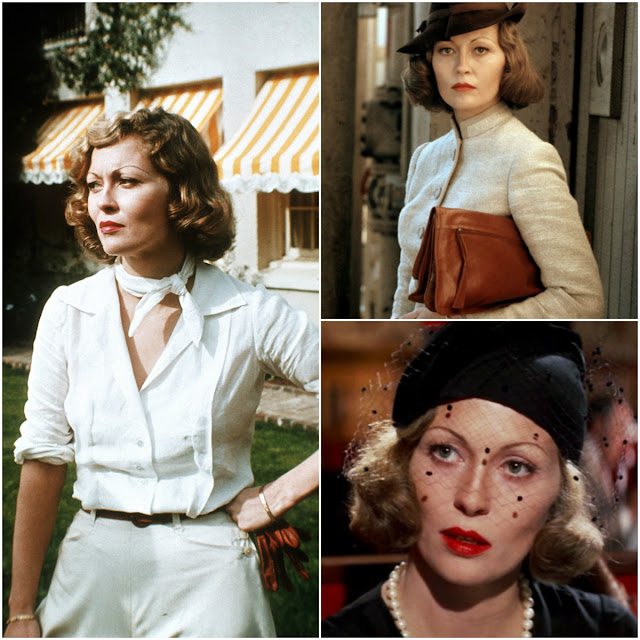 Polanski's Chinatown is one of the best movies of all time. With film-noir elements, it is a wonderful, heartbreaking drama with lots of suspense and brilliant performances. Dunaway thrives on playing strong, independent, complex women. She has a disarming confidence that makes her even sexier and establishes her as a femme fatale. The film, set in the early 20th century, scored eleven Oscar Nominations (among which Best Costume Design) and one win for Best Original Screenplay. Michael Kors' Fall 2015 ready-to-wear collection was inspired by the movie. 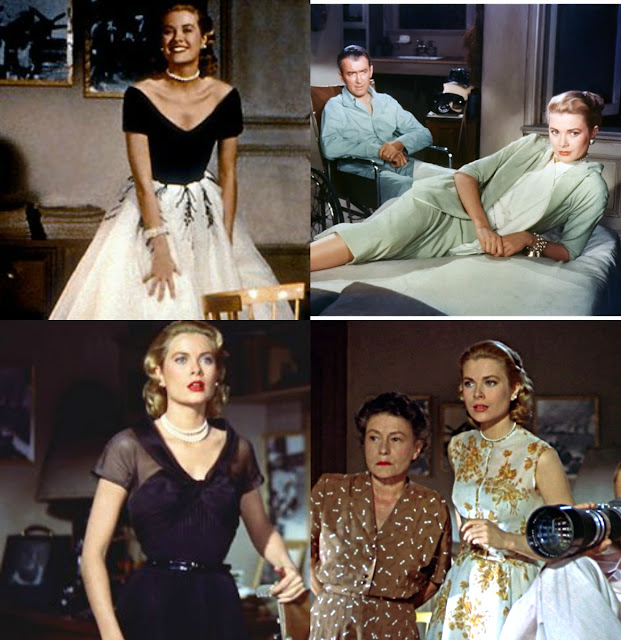 Alfred Hitchcock's muse, Grace Kelly embodied the epitome of elegance that I don't think will ever be found in any woman ever again. She was truly one of a kind. Hitchcock's Rear Window is to this day, one of the most intricate and exciting thriller movies. Kelly's wardrobe in the film is a sight for sore eyes. She floats through James Stewart's apartment in her pistachio two-piece, silk floor-length nightgown or that beautiful belted black silk organza dress and pearls. The looks in the film are what I consider some of the prettiest ever and they will always be the perfect depiction of old Hollywood glamour. 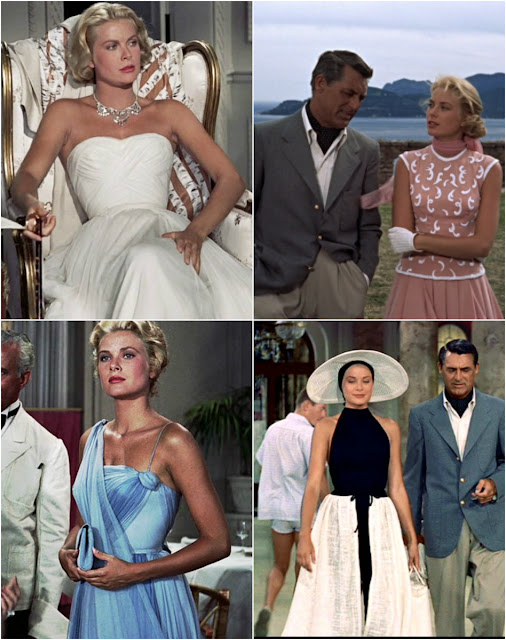 I still remember when my mom took me to an open-air theater to watch this Hitchcock classic. Grace Kelly looked in that movie as cool as the breeze felt that evening. Each look was so carefully and accurately chosen for her, you would never be able to imagine her in anything else. Edith Head was in charge of costume design but Kelly was heavily involved in the process. It was said that Hitchcock favored a cool-toned palette for Grace Kelly's wardrobe so it would give a more frigid vibe that would complement Kelly's character in the film. Both chiffon dresses (the white and the light blue one shown above) are two perfect examples of timeless style. The film was nominated for three Academy Awards among which Best Costume Design. It received an Academy Award for Best Cinematography, and rightfully so. 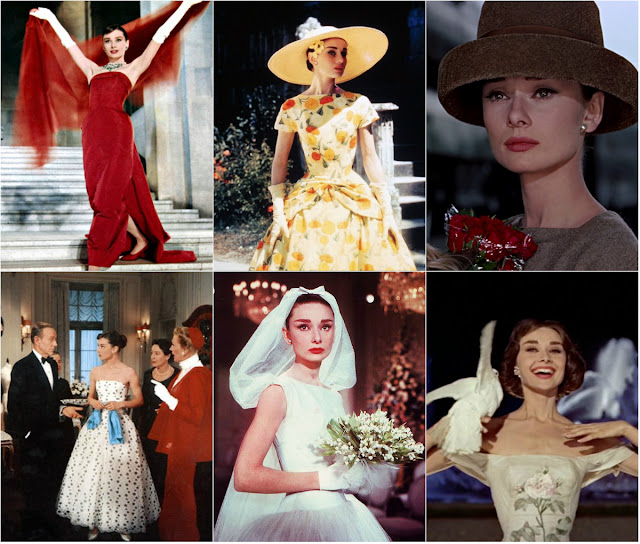 Funny Face is probably one of Audrey's lesser-known films but it is undoubtedly one of the most stylish ones. Hepburn plays in the film a bookworm-type, dorky girl who loves literature and all things intellectual and dreams of going to Paris to meet her idol, philosopher Emile Flostre. She is discovered unexpectedly by a fashion editor who sees her as the perfect embodiment of "beautiful and intellectual" and therefore as the next face of the magazine she runs. The whole film is centered around Hepburn's transformation from girl-next-door to a covetable model who dons every look-of-the-moment for the sake of the magazine. Photoshoots take place all over Paris and the process is eye candy for the viewer of this movie. Costume design was the product of Edith Head's impeccable work as well as Hubert De Givenchy's creations. The film earned four Academy Award nominations among which also Best Costume Design. 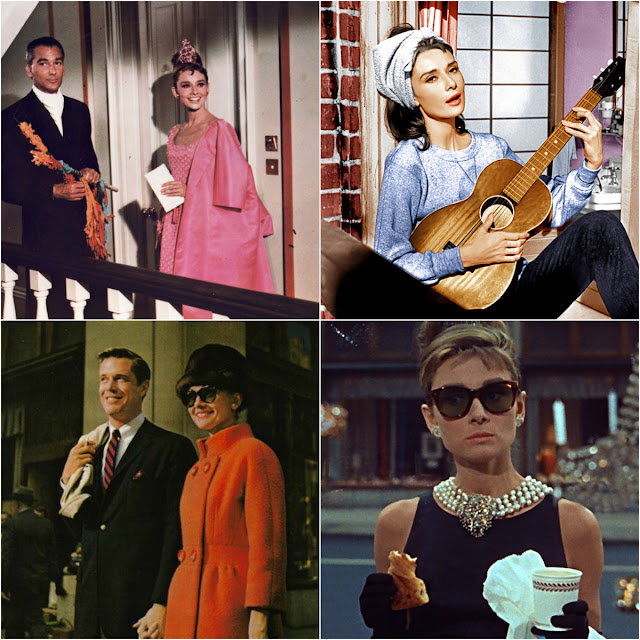 Not mentioning Breakfast At Tiffany's in this post would be a disgrace. It's probably one of my favorite movies of all time. There isn't one look in this film that designers, editors, stylists, bloggers and fashion enthusiasts all over the world haven't used as a reference at least once in their life. The ever classic, LBD and statement pearl necklace look is, without a doubt, the most iconic outfit ever worn in a movie. Holly Golightly's effortless elegance is still a major influence to women worldwide, more than half a century later. Each look is once again the outcome of Hubert De Givenchy's vision for Audrey's character. The film was nominated for five Academy Awards and won two. 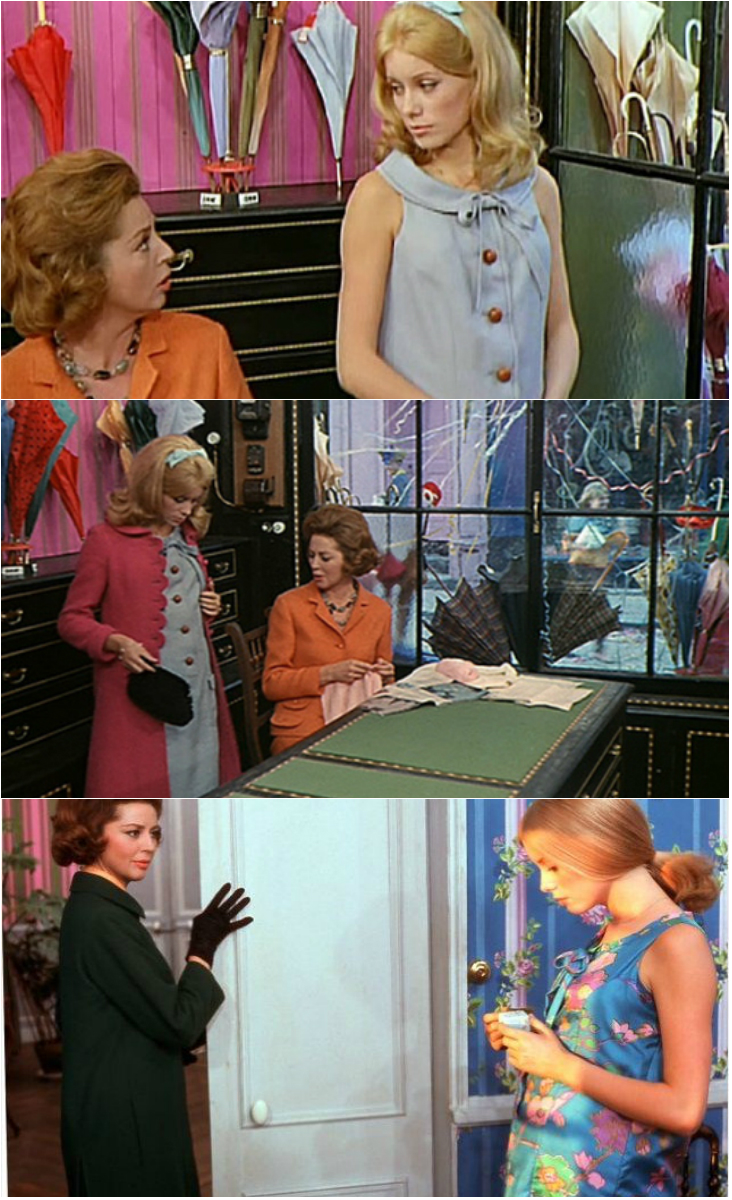 Although the previous ladies hold a dear place in my flick-adoring heart, Catherine Deneuve is hands down my favorite. Maybe it's because I love the 60s more than any other era, maybe it's because Catherine's mod style is somehow chic and flirtatious at the same time. Les Parapluies De Cherbourg is a musical drama which by the end, had in me in tears. The movie feels so bittersweet and the wardrobe only adds to that. You see Genevieve, the main protagonist, transforming from a sweet young girl with her sugary frocks to a lady that grew up too soon (just like many women did back in the day) in her poofy hair and lush fur coat. My favorite look was the A-line floral dress (shown in the bottom image) that matched the wallpaper! It's these small details that make this movie so visually pleasing, but yet with a dose of sarcasm. The movie was nominated for five Academy Awards in total (one in 1965 and four in 1966). 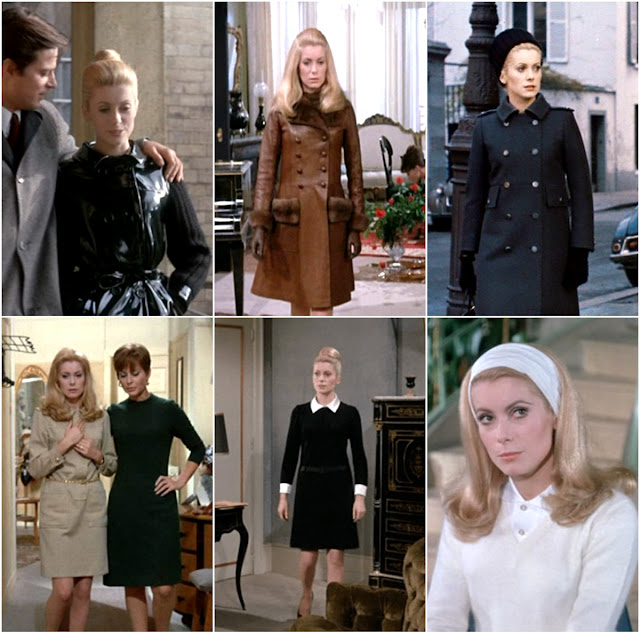 I saved the best for last. Bunuel's masterpiece, Belle De Jour, features a frigid, sexually frustrated woman who desperately looks for a way out of her dull life and finds the excitement she's missing  by secretly working as a prostitute in a bordello. Yves Saint Laurent took care of every single look. From the beige shirtdress to the collared black and white dress to the exquisite outerwear, each outfit is as classy and as timeless as it gets. Deneuve's black patent trench could be worn by any woman in 2015 and look as avant-garde as it did in 1967. Bunuel's anti-heroine, whose dead, but gorgeous eyes and indecipherable soul torment you all throughout the film, is dressed fashionably and conservatively despite her inner urge for debauchery. Her clothes are indicative of her social status, to the point that it makes the other, lower-class prostitutes wonder why she resorted to this job if she comes from money. The difference between her and the others is: she chose this occupation for fun, they did for the sake of their livelihood.

I hope you enjoyed this post. Writing it gave me great pleasure.

I hope to see you soon again! 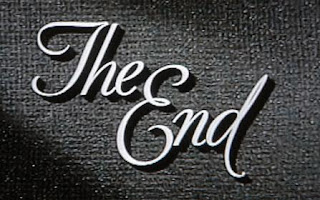