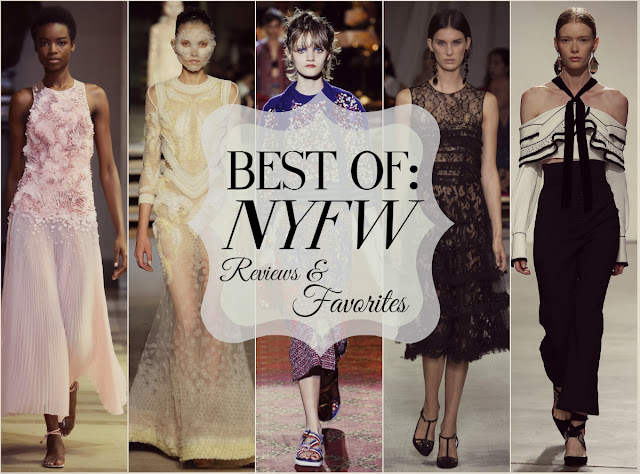 How is Fall treating you so far? Is it chilly enough for a Pumpkin Spice Latte yet? Are you making a wishlist for that cute coat and those 70s peasant blouses? I know I am, even though I still got the A/C on. I guess the heat doesn't want us to part ways just yet.

September is all about NYFW. It's the most exciting month for Fashion. Every fashion person in the world is onto a race to check out the new collections at the Runway segment of vogue.com (since style.com is no more - insert sad emoji here), catch a glimpse of what the A-list attendees are wearing, and just get a feel of that New York air.


NYFW had two different aesthetics to offer this time around: the nostalgia, the romance and the sophistication on one hand and the bold, brazen, streetstyle-infused showmanship on the other. It was all glorioulsly pleasing.

In this short and sweet recap you will read my thoughts on my favorite collections, check the looks that stood out to me and also get a whiff of my favorite beauty moments from the Spring 2016 runways. 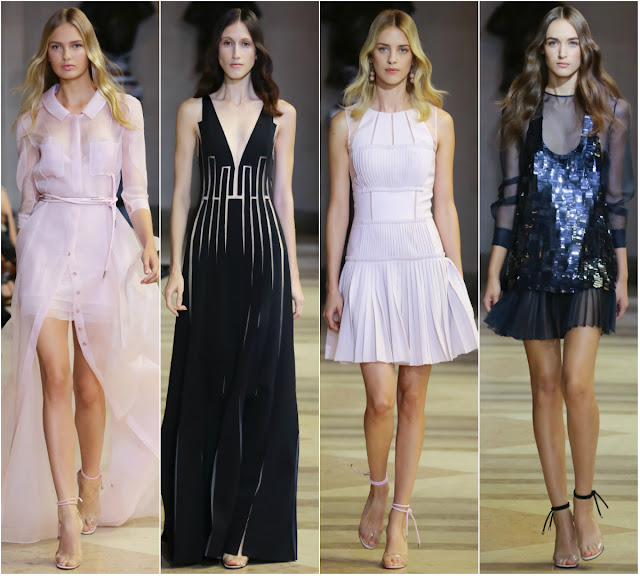 Carolina Herrera is a classic designer, whose collections have always managed to embody a modern sophistication. That was exactly the case with this collection. The feel of the Spring 2016 show was incredibly poignant and current. The manipulation of fabric with the help of technology was brilliant and it made for a fantastic show. I loved the use of soft, sugary but not kitch-y pinks. It added a certain softness and girliness without looking tacky or juvenile. The pleats added to the ultra-feminine vibe, but they also gave a crispness to the soft, ethereal silhouettes. The translucent high heeled sandals made it look as if the models' feet were barely touching the ground, making the effect even more airy and dreamy. Overall, very impressed with Herrera's work on this one. 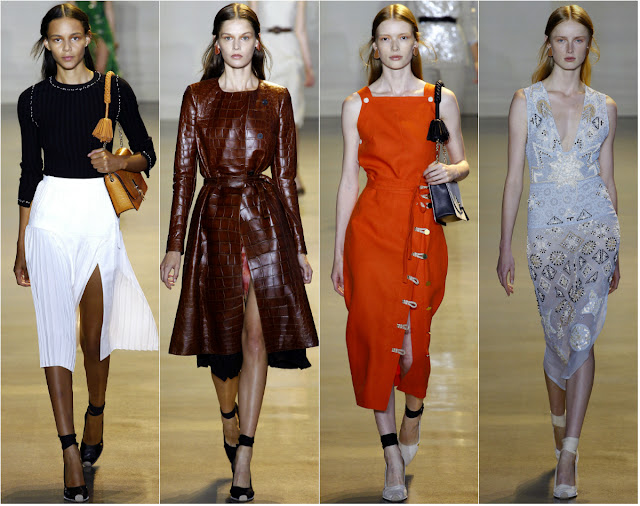 Over the seasons, Joseph Altuzarra has managed to climb really high on my list. The effortless, unapologetic sexiness of his garments is disarming at least. I feel like this collection leaned more on the sophisticated side, rather than the sexy one which was his main focus in the Fall 2015 collection. The croc coat, the embellished body-con dresses showcased his more adventurous side, while the earthy fabrics he used for his daytime, wearable looks had an almost sportswear appeal. Altuzarra seems to have taken a good grasp of the modern woman's needs and aims to cater to those. The button-up skirts and soft shirts will make for good, realistic, but in no way stale workwear. 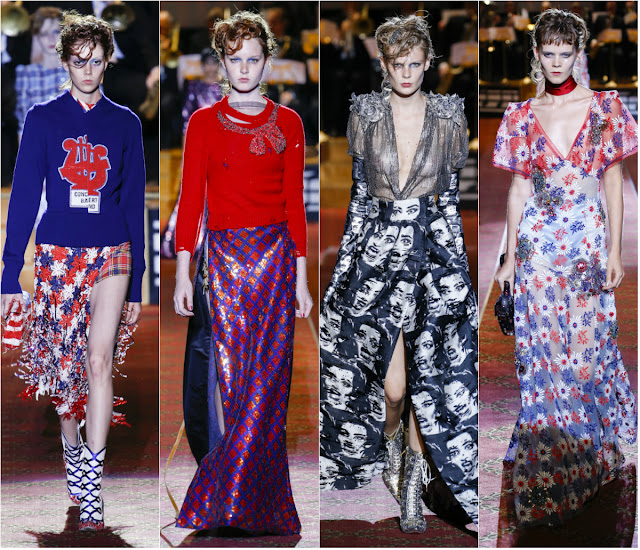 Like I always say, there can be no decent NYFW recap without a dose of MJ. Whether his designs appeal to your personal taste or not, you can't deny the lasting effect of his shows. These are some looks you keep coming back to, if only to try and figure out what you think of them. That's how I know a collection is truly great: it challenges you. This show had once again, lots of drama, which is only natural if you think about his inspiration behind the clothes, which was none other than theater and cinema. Does it get more dramatic or flamboyant than that? The vibrancy and opulence of the collection was very satisfying to the eye, even where it was taken a bit too far. After all, we all love a bit of decadance. 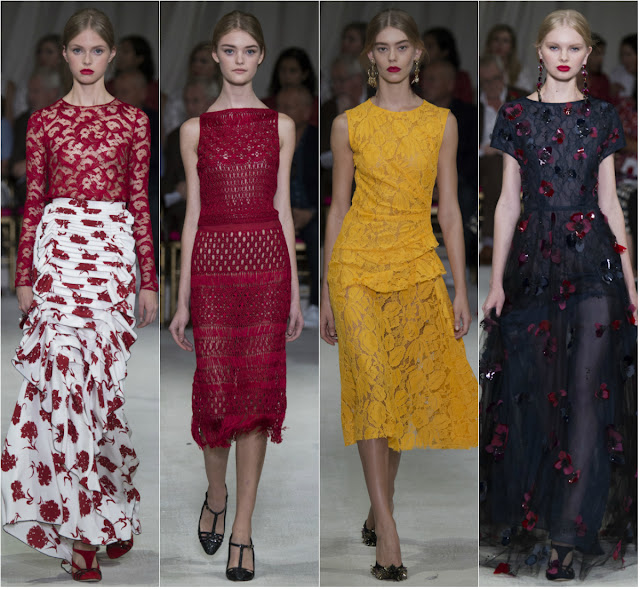 This was a very interesting collection for me because after Peter Copping's debut at Oscar De La Renta last season, this one would be the one to inaugurate a new era for the house. The Fall 2015 collection after Oscar's passing was put together in a very short time. It was however promising enough to make me look forward to the Spring 2016 collection with great anticipation. I was very happy to find that Copping did great justice to Oscar's legacy and presented a collection that was an ode to femininity and romance, two themes that hold a dear place in my heart. I particularly enjoyed the use of color, which was breathtaking and eye-catching. From the fiery, carnation red to the canary yellow lace to the turcquoise and fuschia numbers towards the end (not pictured above), the palette was eye-candy. The models' makeup was classically stunning but fresh at the same time. All the components were to Copping's advantage and I'm a fan already. 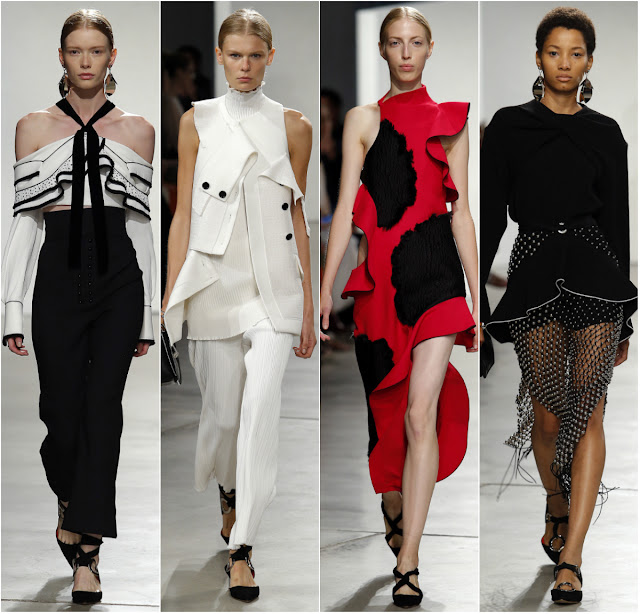 The guys chez Proenza Scouler never fail to impress me. They've become a NYFW-fave of mine over time. I've been their fan since quite early on, because their fashion is always provoking me, pushing me, making me question myself and evolve as a fashion enthusiast. They've always been great advocates for "undone-ness" or un-put-together-ness as I like to call it which is quite far from the way I personally like to dress. Still, I can't help but marvel at it when I see it done right. You really must have a certain level of ballsiness to rip apart an excquisitely sewn and tailored vest and still somehow make it look wearable. The Spanish influence was apparent in this show, with the off-the-shoulder tops, ruffles and high waisted pants that made for very sexy bullfighter attire. My favorite part however were the shoes, which were true standout pieces in the collection, as well as the ruffled fuschia number in the collage above (the image doesn't really do it justice). I love me some clothes with movement and character and those dresses did exactly that. Very happy with this collection and it is a strong contender in my books. 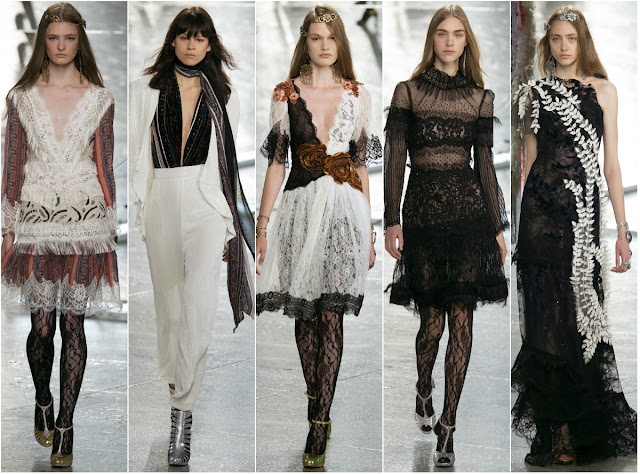 As always, I save my favorite for last. It is no secret that I have criticized the Mulleavy sisters' work many a time in the past. A long time ago, I considered them among my favorites but over the previous seasons I became a non-believer. My faith is however restored. This collection surprised me in the best way possible. It was dreamy, nostalgic, romantic - and I am sucker for all that jazz. The collection evoked the 70s, my favorite era, and it had that girly, boho vibe that all the young'uns yearn for. The Mulleavys have always been on the more maximalist side of things, which hasn't always worked in their favor. This time, though, it did and it made for a fairytale-like show. The dresses with the lace panels were exquisite while the glamorous, Stevie Nicks-inspired looks transported you to a different time and place where all was a bit hazier but more beautiful. The sisters mentioned backstage that the layers in their garments were inspired by poetry and its many layers of meaning, so I guess the most accurate description of this show would be at least poetic.

The beauty looks from the NYFW catwalks got me very excited. I think the highlight was the girls' makeup at the DVF show. Although Diane may not be the most envelope-pushing designer out there, I always love the confidence and femininity that her shows convey. The hair and makeup are always perfect and serve as inspiration to makeup artists and beauty editors worldwide. The colourful eye makeup was the absolute embodiment of Spring's vibrancy and youthfulness. The soft, glowy, pale look at Rodarte accompanied the aesthetic of the clothes very expertly, while the hair accessories made things even more romantic. The modern red lip at Copping's Oscar De La Renta show was a perfect accessory to the ladylike, proper, polished clothing. Note: the modern version of the classic red lip equals minimal use of eyeliner, highlighted skin, groomed brows and a vibrant matte shade of red - think MAC Lady Danger. However, the talk of the town was the heavy face jewelry chez Givenchy. That one was a scene stealer. Tisci has always featured face adornment in his shows but this time he took it to the max and the effect was instant and lasting.

Stay tuned for the LFW recap!