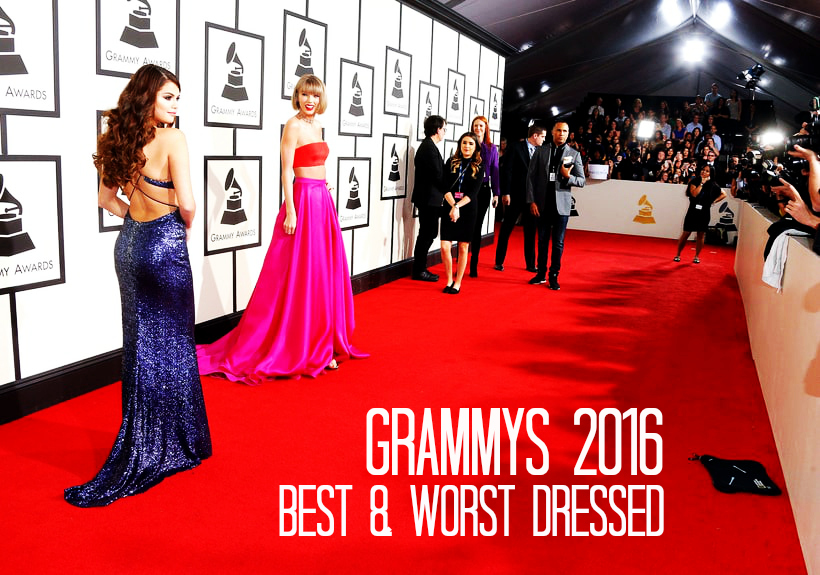 How's your Tuesday going? I woke up today only to find my newsfeed crammed wih Grammy-related posts and of course I had to relish in red carpet fashion and all the juicy details of last night's show.

First of all, can we take a moment to appreciate how EPIC was that burn Kanye must be feeling now after Taylor Swift's acceptance speech? I've had my doubts about Taylor before, I have loved her and I have questioned her many a time, but her speech was classy, poignant and put every damn sexist naysayer to shame. For that alone, she deserves all the awards.

Now let's get on to the most buzz-worthy looks.

Let's start with the bad: 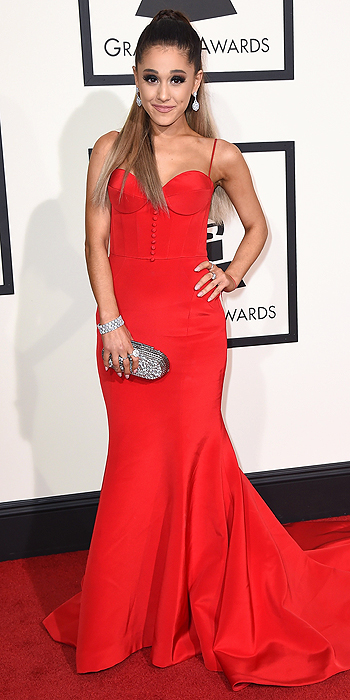 Ariana Grande is just the kind of person who's bound to always wind up on a worst dressed list. I don't know why, but she insists on dressing like a hooker. Nothing wrong with hookers, but I suppose their look isn't something you wish to see on music's biggest night. I would've loved to see her in a more elegant  mini dress that would just suit her age and pop persona better. This whole "diva" thing is just not cutting it for me. 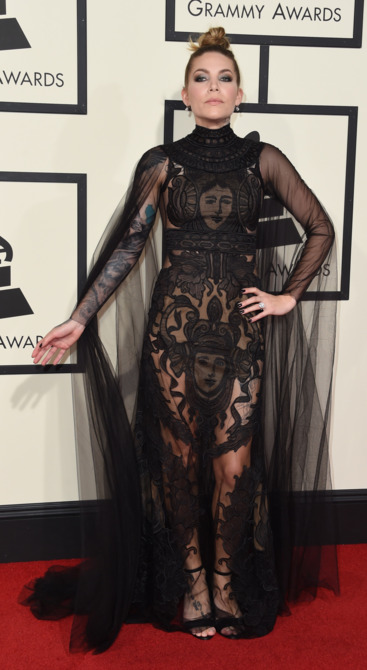 I honestly think the so called "naked dress" has had its fair share of red carpet appearances, we can now put it to rest. Sheer fabric is hardly scandalous these days. More than that, this dress is not flattering in any shape or form, it looks witchy, and not even in a good way. Smug pose and top-knot hairstyle aren't helping either. 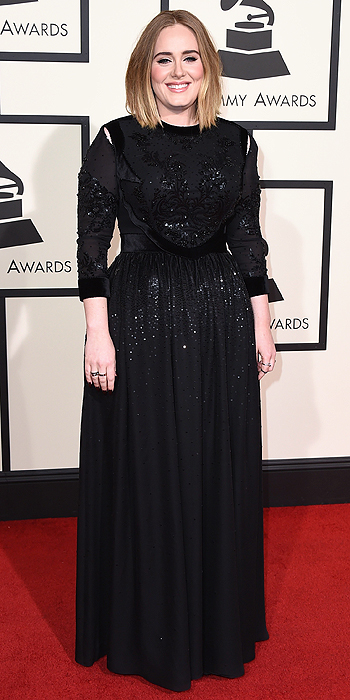 Although it pains me to put Adele in this list, this dress just isn't working here. The bodice is beautiful -albeit a bit too tight - but the bottom just ruins everything. Whoever thought that this pleated skirt would do her any favors? It sadly makes her look frumpy and takes away from the avant-garde element of the dress. She's stunning but that dress (by Givenchy) is a no-no. 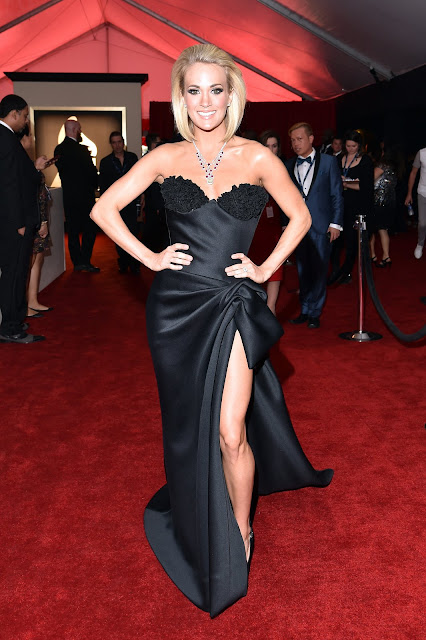 Well it's not like you expect fashion wonders from a country sweetheart and we've definitely seen worse but something makes me always put Carrie to a higher standard than her fellow country stars. Unfortunately, she fell short. The bodice is weird and the Angelina leg doesn't have make much of an impact anymore. Even the choice of jewelry is standard and underwhelming. 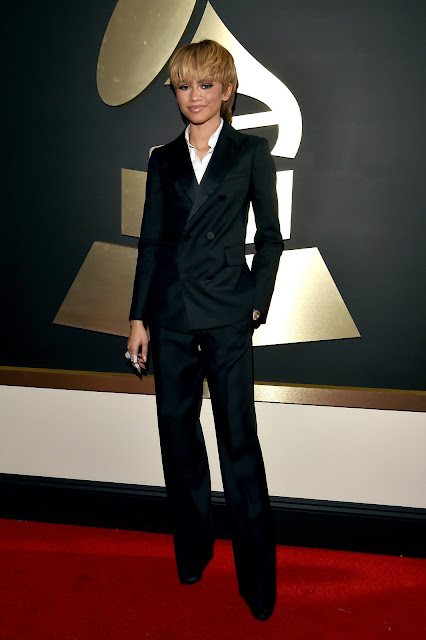 What even happened here. I love a good androgynous style when I see it, this just not the case with Zendaya's look. Her petite frame doesn't allow her to pull off that style and the overall styling isn't working in her favor either. Maybe if she went for a more loosened up shirt and a tuxedo jacket, as well as a more successful hairstyle, she wouldn't have ended up in this list. Right now, all I can see is a little girl playing dress up with her dad's clothes. 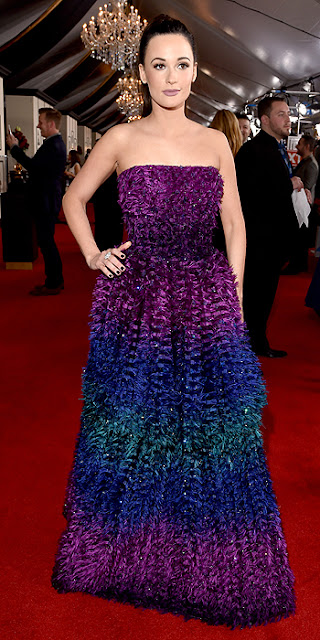 Hello, Kacey, it's me. There's an exotic bird here asking for its feathers back. Thanks. 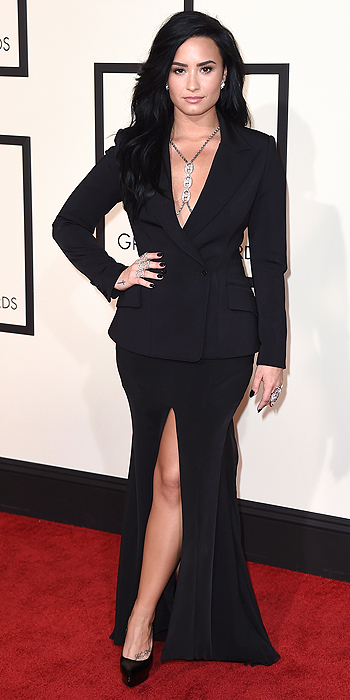 Again, the androgynous thing didn't exactly give here either. Everything just feels a little too uptight and dated, if not matronly. If Demi opted for a tuxedo pant and dainty sandals this would've been a success. Shame. 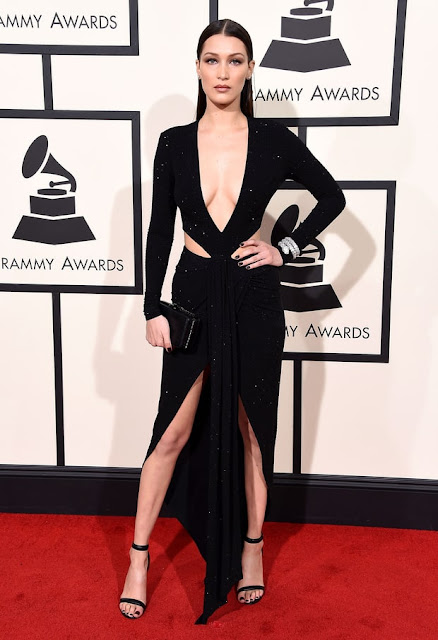 I pondered for a while whether I wanted to put her on this list since super sexy outfits aren't my forte, but honestly she looks smoking (in Alexandre Vauthier). Although I don't care much for Gigi (pretty as she is and all), I have a soft spot for Bella. She's just stunning. Maybe fashion-wise this is pretty safe for someone as naturally gifted as she is, but yet it works and that's what matters. 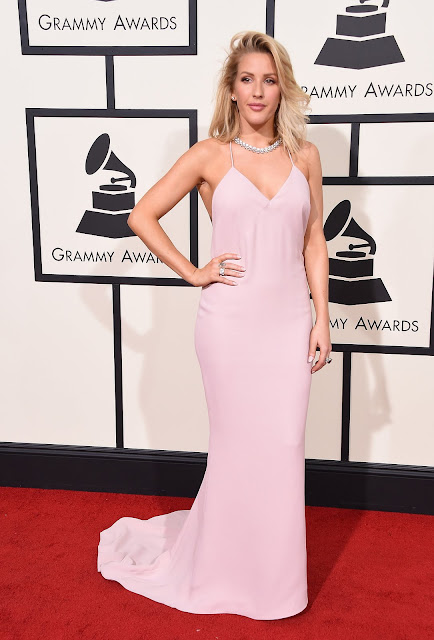 Ellie was one of the big style winners for me last night.  Her Stella McCartney gown paired with a simple necklace and sexy, I-woke-up-like-this hair is just so effortless and ethereal it's perfect for a night like this. Is it too understated? Maybe, but a little minimalism doesn't hurt - in fact it does our eyes a favor. 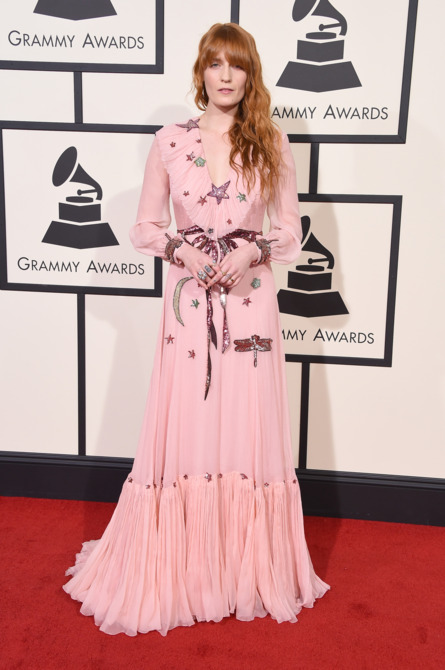 I don't think there is a more fitting combo than Florence and the new Gucci. Alessandro Michele's whimsical, vintagey, quirky style is the match for Florence. If you haven't fawned over Gucci's romantic gowns yet, this red carpet appearance might make you a believer. 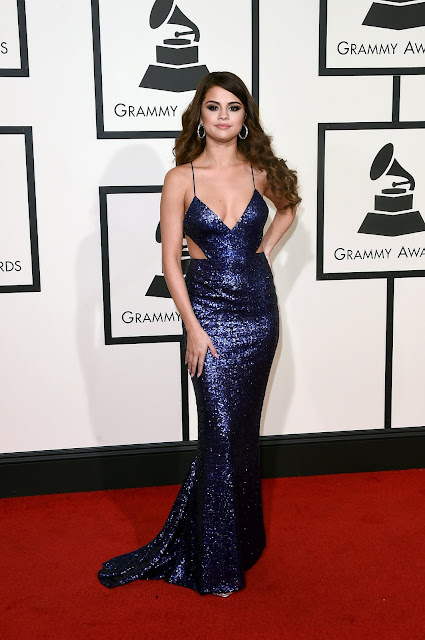 This look is classic Selena: glamorous, feminine, cut-out. I certainly wouldn't mind it if I saw her in something different for once, but honestly this formula delivers and she just looks beautiful here (in Calvin Klein Collection). The one thing I would change probably is the choice of earrings: they cheapen the look. 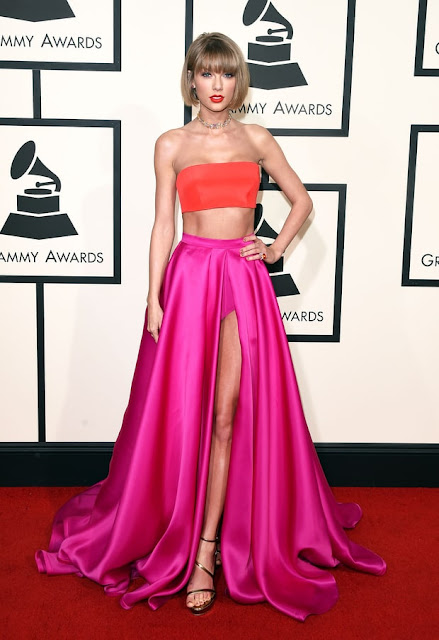 Last night was Taylor's big night and even her choice of outfit (Atelier Versace) alludes to that. Her look clearly stood out from the rest. It was a perfect Grammy ensemble: fun, hip and fitting for the pop star of the moment. The bright coral and magenta scream youthful and playful while T's short 'do gives the look a more high fashion appeal. Well done, Taylor and well deserved.

Which looks did you love and which ones did you hate? Sound off in the comments section!